Home » TYPES » Trees » Dovyalis longispina leaves
Back to Category Overview
Total images in all categories: 11,528
Total number of hits on all images: 6,611,487 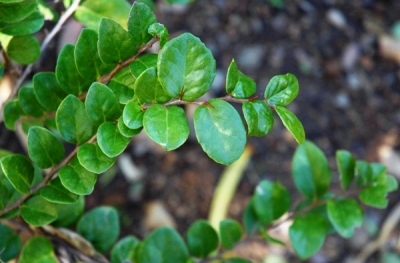 Dovyalis longispina or commonly the Natal apricot is a small tree (SA Tree List No. 510.1). The stems are heavily armed with long, slender spines, but the tree is popular for its pale red and white-speckled fruits eaten by humans, birds and game.

The shiny leaves grow alternate on short, thick stalks. Three-veined from the base, the dark green leaves have entire margins rolled under. The leaf-shape is obovate with rounded tip and tapering base. The briefly deciduous tree drops its leaves when blooming, acquiring a fresh set almost immediately. Leaf dimensions are 2 cm to 9 cm by 1,3 cm to 6 cm.

The fruits are about spherical and shiny, the flowers that made them possible were white and very small, growing in clusters of two to six from leaf axils. The plant is dioecious, meaning that the male and female flowers occur on separate trees (fruits on the female!).

The species is distributed in KwaZulu-Natal and into Swaziland and Mozambique. The habitat is dune and coastal forests, also in some low-lying open woodland areas. The species is not considered to be threatened in its habitat early in the twenty first century (Pooley, 1993; http://redlist.sanbi.org).