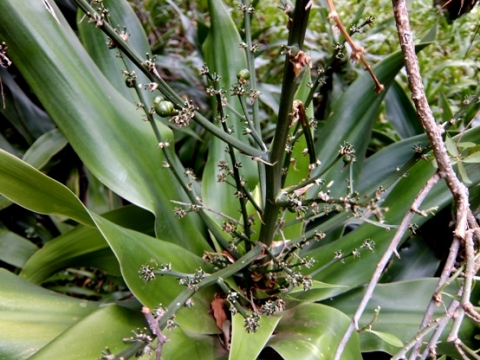 Dracaena aletriformis flowers grow in large, lax panicles from the tips of branches. The bisexual flowers are silvery white to yellowish green and sweetly scented, opening in the evening and remaining so through the night, mainly moth-pollinated.

The perianth is tubular and six-lobed in two whorls of three, the lobes recurving. The stamens are positioned high up on the perianth segments of the bisexual flowers, their filaments inflated. The superior ovary is ovoid. Flowering happens from late spring through summer.

Some green fruits are visible in the photo although most have dropped off already; the photo taken in January. The fruits are globose, single- or two-lobed berries that become reddish orange when ripe and seen on the trees until mid-autumn.

Seed dispersal is performed by the many birds and field mice that eat the fruit. The seeds are rounded and bony (Coates Palgrave, 2002; Pooley, 1993).