Home » TYPES » Trees » Dovyalis caffra, the kei-apple with bare fruit
Back to Category Overview
Total images in all categories: 10,169
Total number of hits on all images: 4,831,452 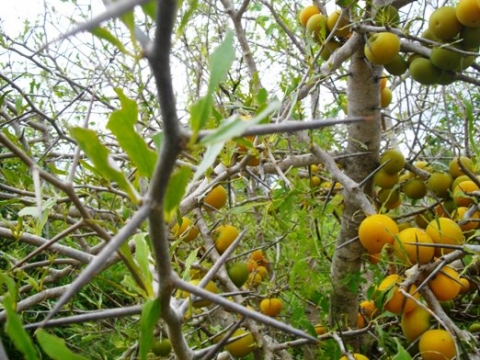 Dovyalis caffra, the kei-apple is a shrub or small tree usually growing to 5 m, rarely 8 m (SA Tree List No. 507).

The flowers are creamy green and small, growing in clusters. The male flowers, in bigger clusters than the female ones, grow on separate trees, the trees dioecious.

The fleshy, globose fruits of the kei-apple are usually seen among the leaves, but something went wrong here: Looking at this photo the saying, no good deed goes unpunished, comes to mind: This tree has produced so many edible fruits for the benefit of its many fans. And what do they do? Consume the leaves! Something locusts and some caterpillars may do.

All these beautiful fruit exposed for their many regular consumers to see from far is over-marketing. Seeds will be as always efficiently dispersed by satisfied carriers. At least some seeds will land in good places, bringing prospects of new trees, while the leaves will regrow and all will be well on the reproduction front.

The species distribution is along the east coast of South Africa in the Eastern Cape, KwaZulu-Natal and the Lowveld of Mpumalanga and Limpopo, as well as beyond the border. The habitat is coastal forest, riverine bush, open grassland and bushveld, sometimes on termite mounds. The species is not considered threatened in its habitat early in the twenty first century (Coates Palgrave, 2002; Van Wyk and Van Wyk, 1997; www.redlist.sanbi.org).