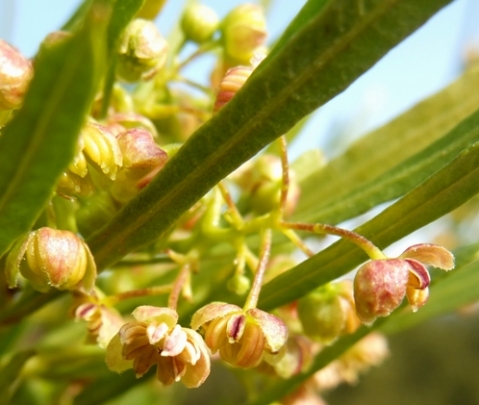 The sexes are represented in different flowers. They may either grow separate on different trees (dioecious) as well, or some trees may be bisexual (monoecious), bearing flowers of both sexes.

The globular flower has three to seven sepals and no petals. A flower becomes about 7 mm in diameter. In a female flower the ovary is two- to four-lobed and the style protrudes; stamens being either sterile or absent. Male flowers have four to eight stamens. The flowers in picture are probably female, the superior ovary appearing to be six-lobed with its lobes separated to the base, inside the spreading sepals.

Flower colour is greenish yellow or tinted reddish as in this photo taken near Oudtshoorn during August. Flowers appear in autumn and winter (Coates Palgrave, 2002; Schmidt, et al, 2002; Leistner, (Ed.), 2000).