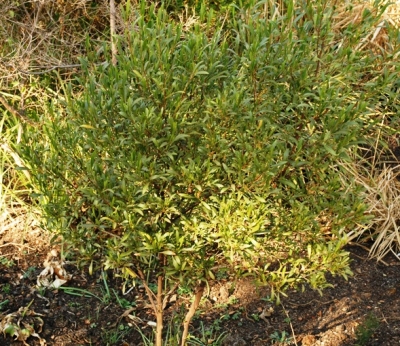 Dodonaea viscosa var. angustifolia, commonly the sand olive may invade in some areas. Where land is defenceless against a newly arrived plant species, such as where natural enemies are absent and the climate and soil are conducive, unfortunate effects may harm the existing vegetation and cause problems in farming and nature conservation.

Not only exotics are invaders. Plants introduced into gardens from elsewhere in the country may also do harm. Local plants such as the sand olive may proliferate on overgrazed land.

Plants are also introduced to serve some purpose beyond being a crop of some sort. The sand olive is also used to stabilise damaged land in sandy areas.

Apart from being widespread in southern Africa the tree today grows in Australia and New Zealand as an introduced species (Coates Palgrave, 2002).