Home » TYPES » Trees » Dovyalis rhamnoides
Back to Category Overview
Total images in all categories: 11,921
Total number of hits on all images: 7,169,046 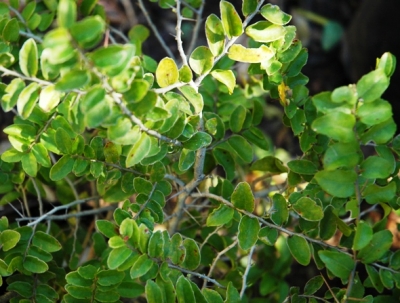 Dovyalis rhamnoides, commonly the sourberry, is a shrub or small tree reaching heights around 7 m (SA Tree List No. 509). The fairly smooth bark is pale grey to brown, becoming slightly ridged and fissured.

The simple, short-stalked leaves are spirally arranged and positioned horizontally. The leaf-shape is ovate to elliptic with a broadly tapering tip and a rounded to lobed base. The margins are entire to slightly toothed. The blades are three-veined from the base, thinly textured and initially hairy. The midrib is sometimes positioned to one side, the lateral veins prominent on both surfaces.

The flowers are greenish to whitish green, small and inconspicuous with 15 stamens. The ovoid fruit is one of several edible fruits borne by the Dovyalis genus, relished by people.  The bright red, fleshy fruits appear from before midspring to summer.

The species distribution is coastal in the Western Cape, the Eastern Cape and KwaZulu-Natal, as well as in the Mpumalanga and Limpopo Lowveld.

The tree grows in varied forest and montane habitats. The species is not considered to be threatened in its habitat early in the twenty first century (Coates Palgrave, 2002; http://redlist.sanbi.org).