Home » TYPES » Trees » Dovyalis zeyheri
Back to Category Overview
Total images in all categories: 11,528
Total number of hits on all images: 6,611,343 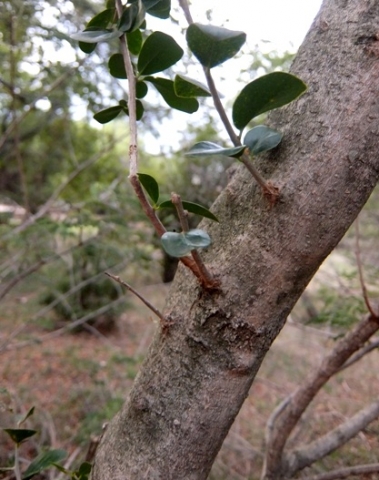 Dovyalis zeyheri, commonly known as the apricot sourberry, is a small to medium-sized dioecious and deciduous tree that grows a main stem that is slender and erect, occasionally reaching 10 m in height (SA Tree List No. 511).

The bark is pale to dark grey, with a fine texture to the fissured and flaking surface on old stems. Younger stems are hairy and have a covering of lenticels; often also slender, but rigid, straight spines that become 3 cm long. The tree is known to exude a foul smell at certain times during the year, probably from its leaves.

The species distribution lies in a broad coastal strip along the Eastern Province through KwaZulu-Natal and inland across the South African provinces north of the Vaal River. It also occurs in Lesotho, Swaziland, southern Mozambique and Zimbabwe.

The habitat is varied, ranging from open woodland, bushveld, evergreen forest margins and dry riparian forest. It is found on rocky ridges and termite mounds, sometimes called termitaria. The tree is not considered to be threatened in its habitat early in the twenty first century (Coates Palgrave, 2002; Schmidt, et al, 2002; Van Wyk and Van Wyk, 1997; www.redlist.sanbi.org).