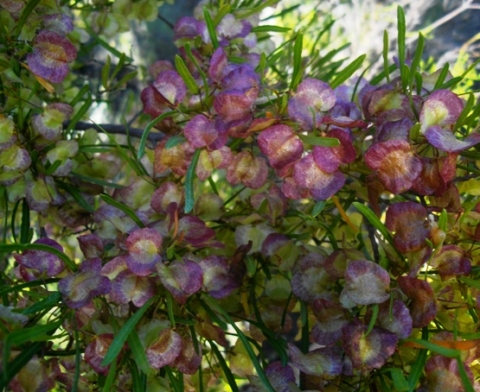 Dodonaea viscosa var. angustifolia has simple, spirally arranged and narrowly elliptic leaves. The leaf surfaces are shiny, pale green, resinous and sticky. The leaf tip and base both taper and the margin is entire.

The subspecies name, viscosa, is a Latin word meaning sticky and the variety name angustifolia is derived from Latin meaning narrow leaves.

The fruit is a two or three-winged capsule similar to Combretum fruits. These fruits may be yellow, sometimes red or purplish as in this picture that was taken near Van Wyksdorp in the southern Cape.

The fruit is sometimes called a samara, which is defined as a dry indehiscent one-seeded fruit with a wing-like extension for aiding dispersal (Schmidt, et al, 2002; Van Wyk and Van Wyk, 1997; Free Online Dictionary).