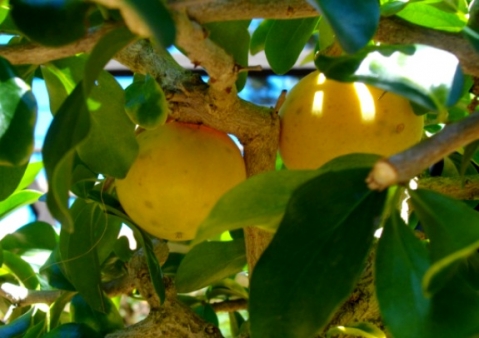 Dovyalis caffra, the Kei-apple is a shrub or small tree usually growing to 5 m, rarely 8 m (SA Tree List No. 507).

The flowers are creamy green and small, growing in clusters. The male flowers, in bigger clusters than the female ones, grow on separate trees, the trees dioecious.

The large, almost spherical fruit of D. caffra is a velvety yellow berry. It has a thin skin and contains soft pulp, rich in vitamin C. Ripening by late spring to midsummer, it is relished by people, birds, antelope, monkeys and baboons.

This is one of the veld fruits that people will not only eat occasionally because they know they can without harm, but because the fruits are tasty, although slightly acidic. The tree is often planted in gardens and a sought-after jelly preserve made of the fruit.

Note the stem colour, as well as the difference in leaf colour upon upper and lower surfaces.

The species distribution is along the east coast of South Africa in the Eastern Cape, KwaZulu-Natal and the Lowveld of Mpumalanga and Limpopo, as well as beyond the border.