Home » TYPES » Trees » Dodonaea viscosa var. angustifolia
Back to Category Overview
Total images in all categories: 11,921
Total number of hits on all images: 7,169,144 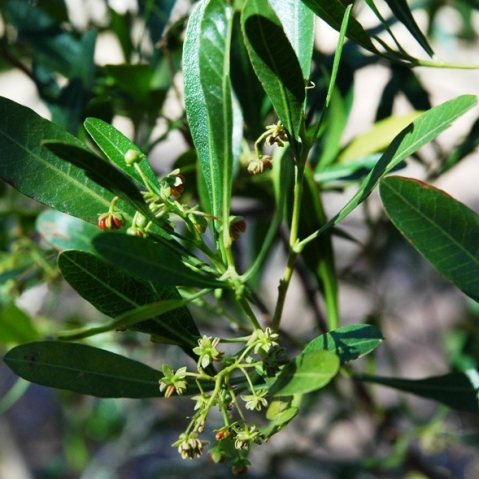 The sand olive, as Dodonaea viscosa var. angustifolia is commonly known, is a shrub or small tree usually reaching heights around 3 m to 5 m, occasionally 10 m (SA Tree List No. 437).

The distribution of the variety is widespread across the southern and eastern parts of South Africa. It occurs in the Western Cape, the Eastern Cape and KwaZulu-Natal, as well as in all the provinces north of the Vaal River and further in tropical east Africa.

The habitat is very varied, including forest, riverine thicket, wooded slopes and stony flats in high rainfall and arid regions. The tree is not considered to be threatened in its habitat early in the twenty first century.

Subspecific name changes have been common for this plant. Currently only one other variety, D. viscosa var. viscosa occurring in KwaZulu-Natal (and further in Africa) is recognised locally (Coates Palgrave, 2002; http://redlist.sanbi.org).