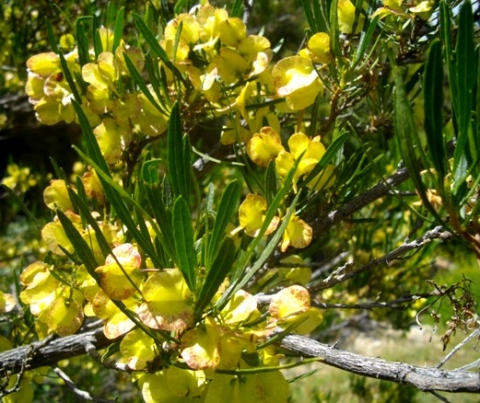 These pale, creamy-yellow fruits of Dodonaea viscosa var. angustifolia were seen in October. The papery wings on the fruits have a few scattered and irregular markings in red along their surfaces. These fruits or samaras, said to be edible if you’re into that sort of experimentation, are seen on the trees from late autumn to midspring.

The erect leaves do not show much lateral veining, although the pale midribs are conspicuous in the sunlight, often prominent on the deep-green of the blades.

The pale grey branches have whitish patches along the longitudinal fissuring of the bark (Coates Palgrave, 2002; Van Wyk and Van Wyk, 1997).