Home » TYPES » Trees » Ekebergia capensis
Back to Category Overview
Total images in all categories: 11,901
Total number of hits on all images: 7,142,162 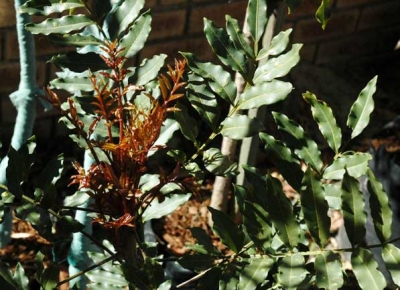 Ekebergia capensis, commonly the Cape ash or dogplum, is a medium to large, evergreen or semi-deciduous tree commonly reaching 10 m in height, occasionally 20 m and rarely 30 m (SA Tree List No. 298). New leafy growth at stem-tips is reddish as in the photo.

The white flowers, sometimes tinged pink, appear in loose axillary panicles during summer. They are sweetly scented, noted more for fragrance than appearance, being quite small.

The species distribution is along the south coast of the Western Cape, extending coastally across the Eastern Cape and KwaZulu-Natal, as well as in the Lowveld of Mpumalanga and Limpopo. It also grows widely in tropical Africa.

The habitat is montane forests, riverbanks and coastal tracts to elevations of 1500 m. The species is not considered to be threatened in its habitat early in the twenty first century.

The Cape ash is popular as a garden subject, commonly planted in parks and along streets of many towns. The leaves, bark and roots are used for treating a variety of ailments in indigenous medicine (Coates Palgrave, 2002; Van Wyk and Van Wyk, 1997; http://redlist.sanbi.org).