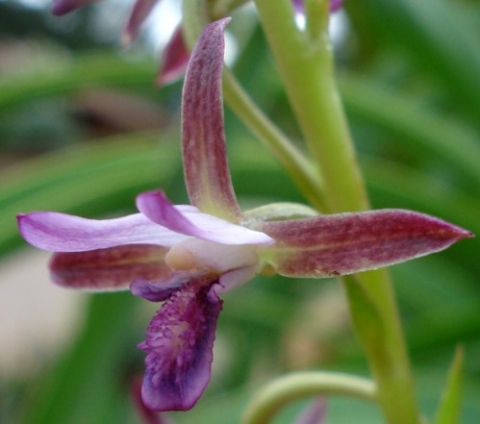 This Eulophia hians var. nutans flower has a variety of purplish tinges upon its tepals, ranging from a dull reddish purple on the narrow, pointed sepals at the back, to deep pinkish on the petal tips and bluish purple on the lip lobes. White is seen on both surfaces of the lower parts of the lateral petals, on the outer surfaces of the lateral lip lobes and on the column in the centre that is yellow tipped. Whatever the tone of a colour present, the application is uneven in most places, with scattered spots, uneven lines and transitional shading generally prevalent.

The median lip lobe has a square, truncated tip, the papillae upon its central crest densely clustered and oriented forward. They are white at the base, faintly pinkish at their tips. The central lip lobe curves down, while the small lateral ones curve outwards. The lateral petals are long and about as narrow as the sepals, their tips lifting from the forward stoop.

This flower is thought to conform to a form of the plant sometimes called baccharia (iSpot).