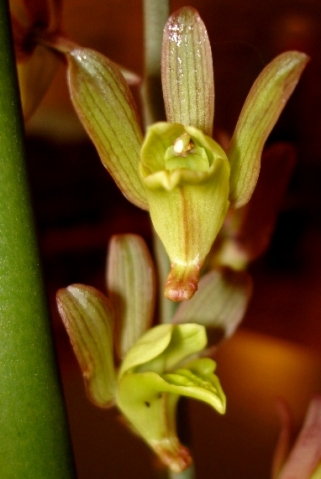 The spur below the lip of this Eulophia hereroensis flower shows vertical veins and even some shine, similar to the three sepals above.

The front end of the lip is channelled due to upturned margins, its tip curved down, suggesting that it won’t hold water. The furrows formed by the lip ridges are suitably aligned, confirming this observation.

The lateral petals are inclined forward over the lip in a graceful ensemble, the sepals serving as backdrop, enhancing the elegance of bodies appearing suspended in air (www.zimbabweflora.co.zw; http://wildorchids.co.za).