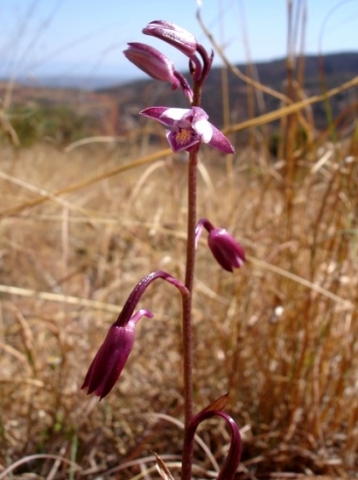 Eulophia hians var. hians is a cormous perennial of the eastern South African grassland. It is also found in Zimbabwe. The plant grows an annual slender flower stalk of about 70 cm in height. This plant was photographed near Roossenekal flowering in August. Flowers may continue in nature until midsummer. The plant used to be called E. clavicornis var. clavicornis.

Leaves grow on a separate shoot. The leaves are narrow, ascending and channelled. They are often not yet fully developed when the plant is in bloom.

There are some Eulophia species that grow branched inflorescences, not single spikes as this species. Only 42 of the about 250 eulophias occur in South Africa. Much of the genus is endemic to tropical or subtropical distributions (Manning, 2009; Wikipedia).