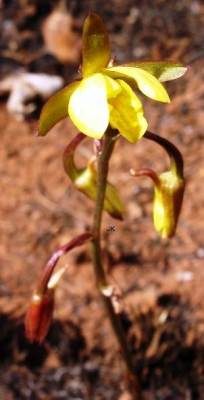 This plant was initially presented here as Eulophia clavicornis var. inaequalis. The current correct name seems to be the one used above. Another fairly recent variation in the name is E. inaequalis.

Nomenclature related decision making depends on the sequence of the publications bearing the different names given to a particular species, additions to the growing body of relevant knowledge, aptness of description and other considerations culminating in the official committee consensus. And yes, the naming history reflects evolutionary change in the body of knowledge about plants, a feature of living systems in whatever form.

Manmade systems in concrete or abstract form are also living systems in themselves. They are characterised by the capability of correcting themselves by being continually corrected by people, thus surviving when they interest more men and women that continue to need and sustain them. People live in in and through their products, their lives given meaning by these products. And life is infectious.

The more than 200 species of Eulophia on earth are mostly ground orchids growing in Africa, Australia, India and the Americas. The name origin: eu means well in Greek and lophos means plume (also Greek). The name refers to the crested ridges of the lips of this genus of orchid flowers.

E. clavicornis had three subspecies, viz. clavicornis, inaequalis depicted here, now renamed and nutans. E. hians var. nutans has the widest distribution, growing in a large part of Africa. What happens to them all finally in the musical chairs naming games may be unravelled for dead species; or never, some plants outliving their names.

E. hians var. inaequalis occurs widespread in the eastern parts of South Africa from the Eastern Cape to Limpopo and tropical Africa. The habitat is open grassland receiving summer rain. The plant flowers in spring. The species is not considered threatened in its habitat early in the twenty first century (http://wildorchids.co.za; www.redlist.sanbi.org).