Home » GENERA D-F » Eulophia » Eulophia hereroensis
Back to Category Overview
Total images in all categories: 10,164
Total number of hits on all images: 4,829,087 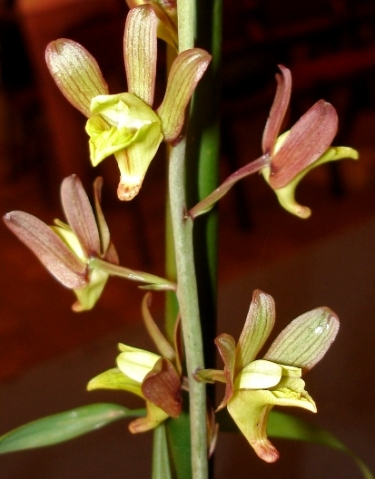 Eulophia hereroensis is a slender perennial, a terrestrial orchid that grows to slightly over 50 cm in height.

The up to seven leaves, arranged in a fan-shape at the base, are developing or mature at bloomtime. They are linear in shape, 12 cm to 30 cm long, their basal sheaths purple spotted. Pseudobulbs may be visible above-ground. The inflorescence may carry from five to twenty-five flowers in a lax spike.

The species distribution is widespread in the eastern and northern parts of South Africa, from the Eastern Cape through Free State and KwaZulu-Natal to all the provinces north of the Vaal River. This plant is not a South African endemic, also growing beyond the northern borders to Angola, Botswana and Zimbabwe, the specific name, hereroensis, linking it with Namibia.

The habitat is semi-arid grassland and bushveld, often under thorn trees in sandy soil among granite rocks. The species is not considered to be threatened in its habitat early in the twenty first century (www.zimbabweflora.co.zw; http://wildorchids.co.za; www.redlist.sanbi.org).