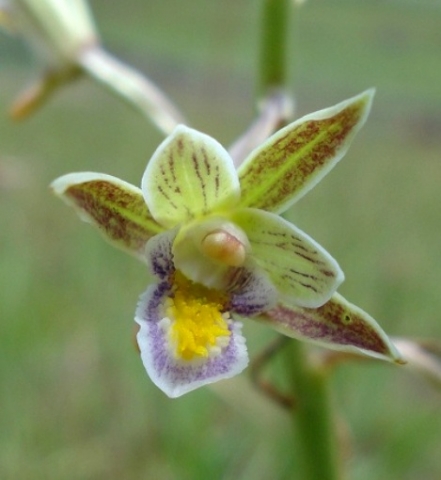 The flowers of Eulophia hians var. nutans grow in a lax spike on a stem that may reach 65 cm in height. The leaves are narrow and channelled, fully developed at flowering time, but less than half the height of the inflorescence. The three sepals showing at the back of the flower have creamy white margins, scattered reddish purple spots along the surface and a faint greenish hue. The sepal shape is narrowly elliptic, tapering to an acute tip. Different parts of the petals are coloured purple, blue, white and yellow. The two lateral petals are broad, rounded with a few longitudinal, finely dotted lines.

The lip of a E. hians var. nutans flower is its most striking feature. From its base the lip has a yellow central strip covered in scattered, rounded protuberances; a feature of many flowers in the genus. A finely blue spotted zone surrounds the warts on the lip, with a white margin around that. The lip margin has wavy central sections on the sides, with some scalloping of the edges.