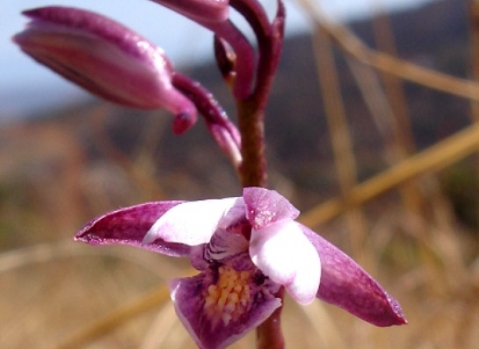 The flowers of Eulophia hians var. hians grow well spaced on an erect spike. Each flower grows from a longish pedicel causing it to assume a nodding position. A single bract can be seen at the base of the pedicel. The characteristic lip crest of Eulophia flowers appears clearly on the flower in this photo. This crest consists of rows of wart-like protuberances, standing neatly arranged in a rectangular pattern in the centre of the lip, away from the margins. The purple and white flower colouring makes way for pale yellow on the warts.

The spur at the back of the flower can be seen on the unopened bud on the left. Its tip is turned down. Pollinators find their nectar reward from here. The upper two petals, inside the hood and the two purple lateral sepals, lean forward and are white on their visible (outside) surfaces (Manning, 2009; Wikipedia).