Home » GENERA D-F » Eulophia » Eulophia longisepala
Back to Category Overview
Total images in all categories: 10,355
Total number of hits on all images: 5,061,945 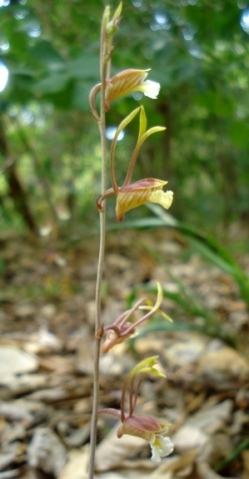 Eulophia longisepala is a slender perennial reaching heights in its annual flower stem from 20 cm to 60 cm. The plant is sometimes terrestrial, but also semi-saprophytic, i.e. growing from decaying organic matter above-ground.

The thin leaves are absent or partly grown at bloomtime, which is early summer. Leaf dimensions are about 20 cm by 0,6 cm, sometimes much smaller.

The species is distributed coastally from north-eastern KwaZulu-Natal through Mozambique, Zimbabwe, Zambia and Tanzania to Burundi. It grows in coastal sand, on granite outcrops, in deciduous woodland and savannah. The species is not considered to be threatened in its habitat early in the twenty first century (Pooley, 1998; www.zimbabweflora.co.zw; www.redlist.sanbi.org).