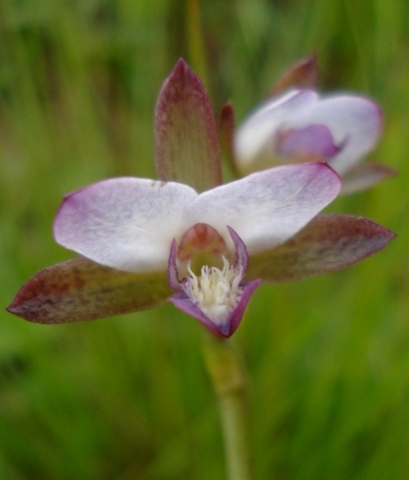 Equally curious, the patch of fleshy protrusions or papillae on the crest of the lip is in this case an unruly patch, uneven in length or orientation and lacking the straight row alignment seen on some Eulophia floral lips.

White here with a smooth, purple fringe around it, the papillae of these flowers may also be yellow, the outside frame of the lip blue, sometimes elaborated by a white margin. The lateral lip lobes are small and erect, positioned towards the back. The column in the centre is positioned between them.

The obliquely shaped, broad lateral petals with purple, mucronate tips are shorter than the darker, oblong sepals behind.