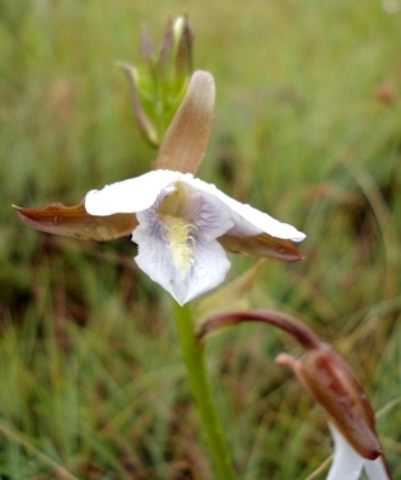 The flowers of Eulophia ovalis subsp. ovalis grow in a lax spike. A multi-coloured flower, the tepals display at least the following colours on some of their parts: purple, blue, white, cream and beige.

The central part of the lip has a creamy yellow patch covered in scattered, warty protuberances, slender and curved in shape. This is a distinguishing feature of flowers of many Eulophia species. A finely blue-lined zone surrounds the warts or papillae of the lip, fading into a white marginal region in the photo. The margin of the oval lip is irregularly shaped, bulging in the centre and tapering to its acute tip. Two smaller lip lobes curve up from the base of the central one.

The three sepals are buff or purple coloured, maybe depending on flower age and darker on the outside. There is a small, conical to cylindrical spur at the back of the lip, visible on the bent down flower that is partly in picture. The spur varies from 1 mm to 5 mm in length.

The dorsal sepal recurves to a rounded tip here and sometimes leans forward, while the lateral pair has acute tips, their margins sometimes wavy. The lateral petals are white on their outer surfaces, here they have rounded tips (Manning, 2009; Pooley, 1998; iSpot).