Home » GENERA D-F » Eulophia » Eulophia longisepala flower
Back to Category Overview
Total images in all categories: 10,504
Total number of hits on all images: 5,163,368 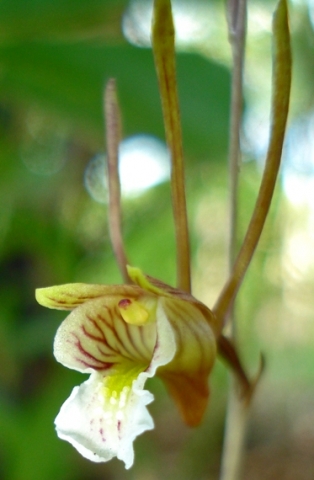 The flower of Eulophia longisepala is characterised by long thin sepals, the rest of it conforming to the typical eulophia flower structure.

The lateral petals are about half as long as the sepals, elliptic and oblique in shape, leaning over the lip. They are green to yellow-green or brown, tinged purple. Flower colour varies considerably.

The protruding middle lobe of the lip is white near its tip, yellow-green at the back. Three parallel, fleshy ridges are present upon the central crest of the lip that has markedly uneven margins. The large lateral lip lobes are erect on the sides of the column. They just about reach the petals, forming a partial enclosure for the column, open at the front for the convenience of pollinators. These lateral lobes are pale olive-green with conspicuous maroon veins meandering across their surfaces.

Similar veins are visible on the petals, even faintly present near the white tip of the central lobe of the lip in picture. A glimpse of the tip of the column, yellow and maroon below the petals, is offered by this flower (Pooley, 1998; www.zimbabweflora.co.zw).