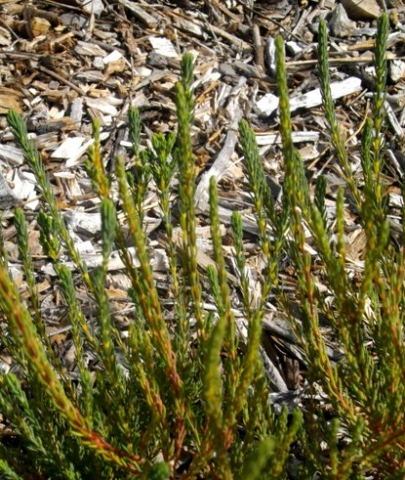 These leaves of Erica albens var. albens were photographed in Kirstenbosch during March. In spite of the long bloom season, which lasts from autumn to midsummer, the white or yellowish green flowers were not present at the time.

Classified in the Platyspora Section of the Erica genus that bears mostly non-tubular flowers with star-like, spreading corolla lobes, the flowers of this member of the group are small, not hairy or sticky. The somewhat urn-shaped to tubular flowers are inflated at the base, tapering to the narrow throat. They grow in small groups from leaf axils near stem tips, arranged around the stems a little like bottle brush flowers.

The leaves seen here adhere in groups of three to the pale or reddish stems. They are narrow and rigid, also hairless. The much branched shrub becomes 1,2 m tall in its southern Cape mountain habitat, but may sometimes only reach 30 cm in height.

The plants grow on moist higher slopes of the Swartberge, the Outeniqua Mountains, the Kammanassie Mountains and the Langeberg. There is also an E. albens var. longiflora variety. The plant is not considered threatened in its habitat early in the twenty first century (Vlok and Schutte-Vlok, 2010; Bond and Goldblatt, 1984; www.redlist.sanbi.org).