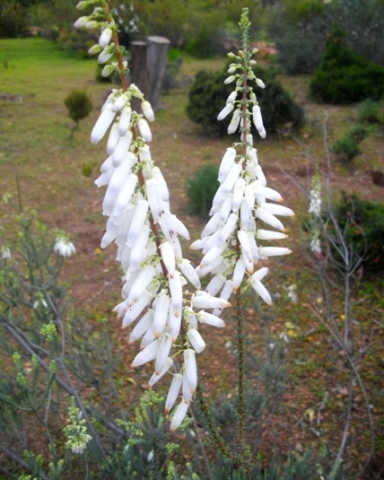 Maybe this white form of Erica bauera landed the species the common name of bridal heath. It was seen in the Caledon Wildflower Garden flowering in July. This species will flower at any time throughout the year, adding to its popularity with gardeners.

Pale to dark pink forms are also seen, some with two-toned flowers. The oblong anthers of E. bauera are about 2 mm in length, hidden inside the flower tubes. The style is longer than the stamens, but still included in the corolla up to its tiny, knob-like stigma (Baker and Oliver, 1967; Bond and Goldblatt, 1984).