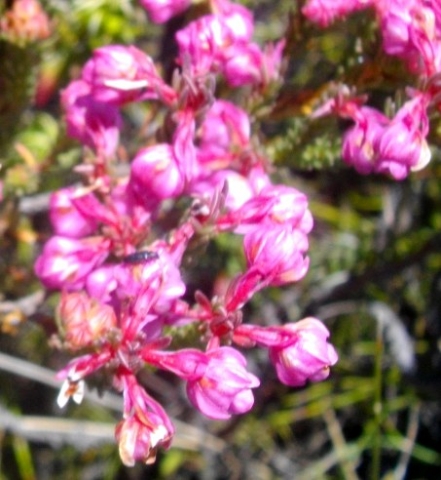 Erica baccans, the berry heath, bears its flowers terminally in small clusters on short side-branches. Baccans is derived from the Latin meaning berry-like.

This Erica belongs in the group of species characterised by a conspicuous calyx appearance. Some of those, a smaller group that includes E. baccans, is known as Trigemma. They have their flower parts in threes or fours, the anthers included inside the corolla, as well as some other shared features.

The globular to urn-shaped corolla of E. baccans with its slightly outward curving shallow lobes lacks nothing in attractiveness. Its calyx, the outer cloak of dry, keeled sepals, covering more than half of the corolla length, however, constitutes a significant floral component of the species. There is a basal bulge behind the flower, surrounded by notable pink bracts,

E. baccans plants grow large and bushy or willowy, up to 2,5 m tall. The leaves are small and linear, ascending close to the stems. A whitish line is visible along the centre of the outside leaf surface.

The species distribution is lower to middle elevation mountain slopes of the Cape Peninsula. Its familiar flower profusion at the height of the blooming season occurs somewhere between end autumn and end spring.

The species has been successfully used in horticulture; too successfully in Australia where it has escaped and invaded grassland and more (Manning, 2007; Clarke and Mackenzie, 2007; Baker and Oliver, 1967; iSpot; www.plantzafrica.com).