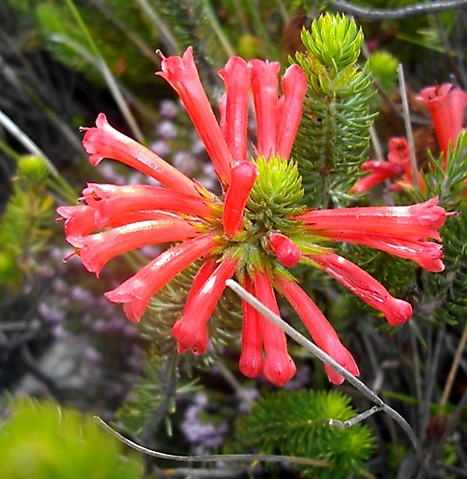 The flowers in picture radiate outwards near a stem-tip, apart from the cylindrical buds presented near erect. Pinkish red styles protrude from some open flowers. Flowers may be seen throughout the year.

On most of the erect stems the linear leaves veer away from the stems, while on one they are appressed to the stem in a section near the tip. Yellow-green at the tips of most stems, the leaves may also be bright green or dark green as they age on the pale grey stems.

The species is distributed in the southwest of the Western Cape from the Cape Peninsula to Tulbagh and Riversdale.

The plants grow in fynbos seeps, also on lower to middle slopes and plateaus that may be dry. Three of the seven subspecies are considered unthreatened in habitat early in the twenty first century, while the others are deemed rare, vulnerable, endangered and critically so respectively (Manning, 2007; http://redlist.sanbi.org).