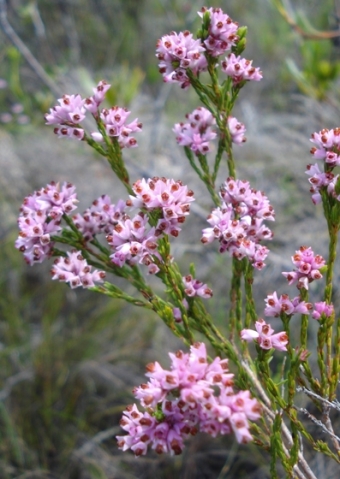 Erica articularis var. articularis is an erect shrublet of variable height with pale, bare lower branches that are roughly marked where leaves had dropped off. The leaves clustered on the upper branches are sparsely imbricate, adhering to the stem or nearly so. These small, almost stalkless leaves are fleshy, sometimes yellowish at the base. Leaf shape is narrowly oblong with a convex, keeled outer surface and a tapering tip.

The distribution of this Erica lies in the southern fynbos from Hermanus into the Eastern Cape. The plant grows on sandstone slopes at medium and upper elevations among rocks. The plant is not considered to be threatened in its habitat early in the twenty first century (iSpot; www.redlist.sanbi.org; www.fernkloof.com).