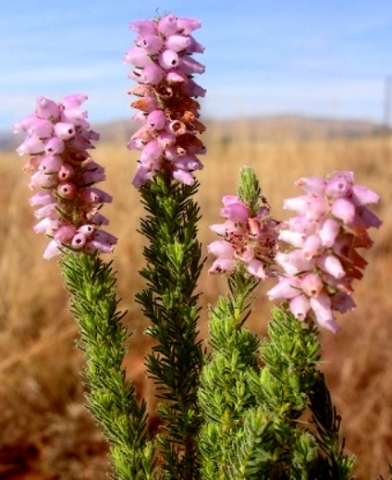 Erica alopecurus gets its name from the tail of a fox. Alopecurus is Greek for fox’s tail, referring to the distinguishing feature of straight and densely leafy branches.

The branched, erect shrubs grow to 30 cm. Some of the plants are notably hairy, others are hairless; even those growing in the same areas show this duality. The leaves grow in groups of three, incurved and ascending, linear up to 6 mm in length.

The distribution is from Boschberg in the Eastern Cape all along the Drakensberg and Lesotho to the Soutpansberg in Limpopo. This picture was taken near Sabie. The habitat is stream banks and montane grassland, rocky slopes and kloofs. The species is not considered to be threatened in its habitat early in the twenty first century (Baker and Oliver, 1967; http://redlist.sanbi.org).