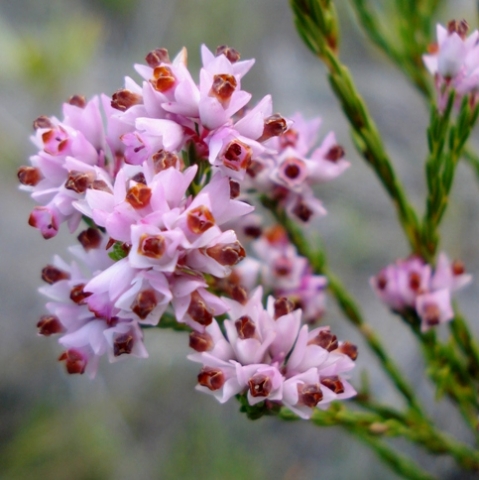 The flowers of Erica articularis var. articularis grow in small clusters at stem tips. The flowers face upwards or outwards, only rarely nodding. Small, erect bracts are found at the flower base; their position approximate, i.e. close to the sepals and slightly spreading. These bracts are elliptic in shape and coloured the same as the sepals.

The four large sepals of each flower are keeled to rounded, tapering to acute tips that may curve inwards slightly; they are coloured and dominate the floral appeal, also because the corolla turns brown early. The sepals give the flower a somewhat square appearance seen from the top; one opposite pair of sepals overlaps the other.

The slight outward spread of the sepals away from and around the narrowly urn-shaped corolla allows it to stand slightly taller than the calyx. The corolla is constricted close to its tip, with four rounded lobe tips above the flower mouth. The style and anthers are contained inside the corolla tube, the stigma sometimes seen in the flower throat.

Flower colour is pale to bright pink. The blooming season is long, from midwinter to midautumn (iSpot; www.fernkloof.com).