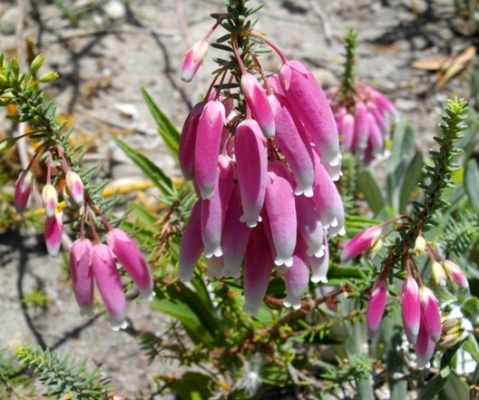 Erica bauera is a single-stemmed, hairless shrublet that grows erect, slender branches, lanky and open, to heights around 90 cm. The species is taxonomically grouped with more than twenty others in the Pleurocallis section of the Erica genus, characterised by axillary flowers with tubular corollas, typically longer than 12 mm. Grouping similar species of a large genus together facilitates identification searches.

SANBI has recently changed the name to E. baueri subsp. baueri but no explanation could be found, no reference to the old name given and no widespread adoption of this name seems to have taken place. The old name will provisionally be retained on this Site.

The dark pink garden specimen in picture has two-toned flowers, white near the tips and on the corolla lobes.

The species distribution is in the Western Cape south of the Langeberg Mountains between Albertinia and Riversdale.

The habitat is sandy and limestone fynbos flats, the soil slightly sour. The species is considered to be endangered because much thatch harvesting occurs there, sometimes accompanied by seasonal burning, brush-cutting or ploughing to secure good thatch crops. Overgrazing is also a problem.

This attractive species is well-known and popular as it is easy to grow, being both hardy and long-lived; therefore unlikely to disappear from gardens (Baker and Oliver, 1967; Bond and Goldblatt, 1984; www.plantzafrica.com; http://redlist.sanbi.org).