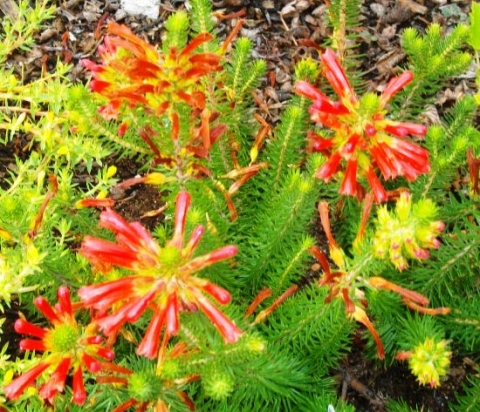 Erica abietina, also known as red heath, may be confusing as far as flower colour is concerned after its 2002 taxonomical rearrangement. This is so because those charged with the duties of classifying the species, have much more than flower colour to consider when combining or separating different forms. Seven subspecies were recognized in Oliver's 2002 revision. They vary in flower colour, some are red flowered indeed, but others are pink, yellow, orange or magenta! These plants are found on the mountain slopes in or near the Cape Peninsula.

The name abietina links the species to fir trees, based on the resemblance of the leaves to fir tree needles (www.plantzafrica.com). The neatly arranged leaf whorls can be observed in the picture. It was taken in Kirstenbosch in March, when flowering was abundant. In fact, there may be flowers during any month of the year on this hard-working species!  The flower tubes are sticky and the anthers may protrude (Manning, 2007).