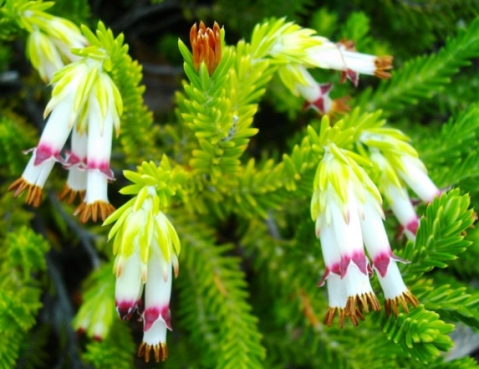 Erica banksii has three subspecies, viz. subsp. purpurea, subsp. comptonii and subsp. banksii. The Erica genus, being a very large one, is subdivided into several sections or sub-genera. E. banksii, previously known as E. banksia, belongs in the section or sub-genus Didymanthera. This sub-genus comprises five species growing in the Western Cape, one of which is also indigenous to the Eastern Cape (www.biodiversityexplorer.org).

The plant is a sprawling woody shrub of about 60 cm tall. It grows on fynbos slopes among rocks at varying altitudes. The leaves are typically thin and narrow as is common among the Ericas. Some modified leaves looking like sepals can be seen at the base of the flowers. The upper row of these "sepals" is whitish in colour with light brown tips. The flowers with their unusual corolla tubes occur in pendulous clusters. The colours may vary from nearly white, pink or yellowish on corollas with contrasting coloured lobes, e.g. purple or red (www.fernkloof.com).

The plant in picture was flowering in Kirstenbosch during March. This Erica normally keeps blooming through winter until October.