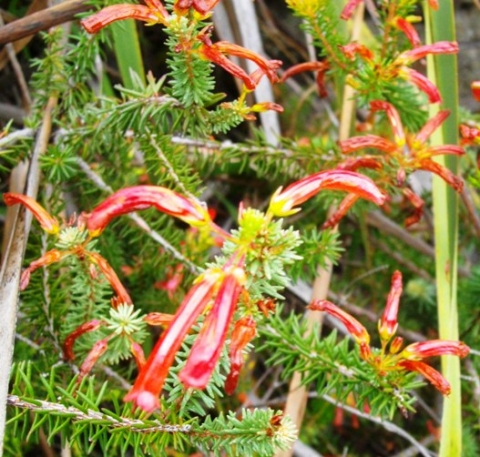 Ericas are among the plants with the oldest recorded descriptions. Theophrastus, student of Aristotle who wrote about plants in the 4th century BC was the first whose reference to Ereike plants was preserved into our time. Pliny, the Elder, the Roman equestrian soldier and encyclopaedist who lived in Pompeii at the time of the 79 AD earthquake (that destroyed his city and killed him), had also noted plants by this name (Wikipedia).

The plant descriptions preserved from classic times show the range of early human interest in plants. It is not only food plants or trees yielding wood for weaponry and shelter that were noted and recorded. Curiosity and the beginnings of learning took the ancient scribes even beyond plants with medicinal uses. Aromatic plants and beautiful flowering species were also named, recorded and grown. From even before this time records exist of Xerxes, Emperor of Persia, studying and collecting of plants during his campaign against the Greeks in 480 BC, for his gardens back home.

Recorded human history is not much older than five thousand years.  But human curiosity and observation of interesting details, social systems providing for learning and languages existed long before the invention of writing and recording. This enabled the human race many thousands of years ago to notice and appreciate nature. Could it have started 50 000 years ago?  Or double that?

The ancient records relating to Erica plants from around the Mediterranean Sea is a link to the about 14 Erica species that Europe still has in our time. Africa from Ethiopia to Zimbabwe has some Erica species in restricted habitats mainly along the Rift Valley and the mountains near the big lakes. The bulk of the diversification or differentiation of the genus Erica occurred in Southern Africa, however, where about 780 species of this large genus grow. Especially the Cape fynbos veld has among its rich heritage of endemic plants a colourful treasure of ericas that flower on the mountains and valleys around the farms and towns for all to enjoy. Getting to know them is a start towards helping conserve them.