Home » PARKS AND GARDENS » Quiver Tree Forest » Living space
Back to Category Overview
Total images in all categories: 11,037
Total number of hits on all images: 5,688,099 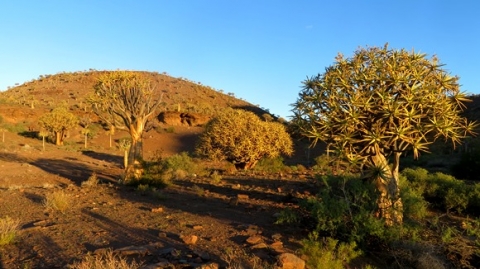 It’s not a house but a rock. The clear space among the ample-crowned quiver trees looks inviting as a suitable place for some family to call home. Habitability is, however, determined by factors like the availability of water and food. The quantities of basics and extras required vary widely among all animal species eyeing any prospective terrestrial real estate.

For humans, the basic considerations apply, as well as a wondrous collection of culture and class issues making up standards. Standards are a function of necessity, ingenuity, fantasy and resources, as well as what people choose to add. Politics would keep some people from living here, while bureaucracy might habitually postpone implementation by obfuscating selected considerations, until people ignore them in civil disobedience.

More places to live are being considered by the burgeoning human population that continually needs more space than ever before, although the space allocation per person is being decreased all the time. Parts of the earth have always been out of reach for physical hardship or impossibility reasons. Others are out of bounds by human decisions of various kinds, such as never having become fashionable or lost their appeal due to who else lives nearby. Still, everybody eyes the best option available, settles for second best or copes with the bare minimum.

Nowadays need may lead to reconsideration of past choices about far-off places, although refugees clog cities. Since we have begun to consider populating the moon and Mars, rethinking our preferences regarding living standards must come into the reckoning at some point. New horizons for the unlimiting of growth may resurrect the true pioneering spirit of some historical eras.

At the same time there are places where the sea is claiming land back, where unrehabilitated mining and industrial sites lie abandoned because they constitute danger and gather weeds beyond the economy, where nuclear accident and radiation waste tell us to keep out for some centuries to come, and where floods invade living space during rainy seasons, killing people.

The answer? Get used to the new challenges, find ways, manage better and survive. Some will.