Home » PARKS AND GARDENS » Quiver Tree Forest » Life and death
Back to Category Overview
Total images in all categories: 11,037
Total number of hits on all images: 5,688,225 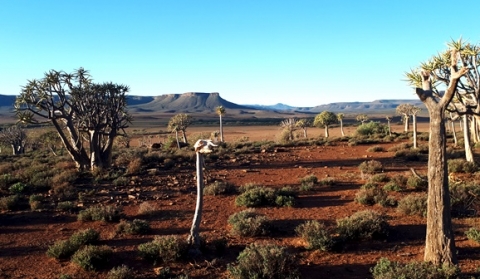 The table-top mountain in the distance towers impassively over a landscape that mostly transforms slowly in its low resource ecology through seasons, longer cycles and permanent changes. Flowers in season and rain are about the only short term events of note on this land.

These quiver trees have been living and dying here since times immemorial, from before they were called choje (quiver) by the San people. A rather peaceful existence, to be a tree on open ground among members of one's own kind. Not that peace always reigned around them. People have been coming here for long and peace among them has always been an uncertain and elusive affair.

What does peace mean anyway in a land populated by one tree species interfered with by so little? Would peace be any less if this had been a forest of diverse species? It’s merely a human invention for contrast against their habit of war and related disturbances. Or is it?

Might the competition in vegetation for resources like water, nutrients, space, sunlight and whatever else be looked upon as plant wars? If so, plant competition would be to human wars as rust is to fire: too slow for people to recognise the element of conflict in it. Conflict nevertheless, as something alive is consuming something else that was or still is alive.

In a sense competition or conflict is ubiquitous and eternal among life forms; active here or nearby in every serene landscape. Eating some kind of neighbour is not an act of war but of need. Loving may be part of it, depending on the taste.

So wars among the species morph into multifarious guises according to the kinds of organisms involved. Each sinister in its particular context, whether angry conflict or a meal in congenial circumstances is taking place.

In picture, somebody has placed the white skull of a dead animal upon the stem of a quiver tree that died young. What other explanation for this strange phenomenon may come to mind?

As far as the eye can see across this wide expanse, this is the only manmade modification of the landscape in view. A low proportion of people can today travel far enough to see places so free from manmade impact. Even here the invisible effects of human peacetime endeavours, industry and commerce permeate air and water.

Fragile as our world has become, the devastation that modern warfare would add does not even have to be considered to know that our world is at risk (Van Wyk and Smith, 2003).