Home » PARKS AND GARDENS » Quiver Tree Forest » Multi-stemmed
Back to Category Overview
Total images in all categories: 11,037
Total number of hits on all images: 5,688,244 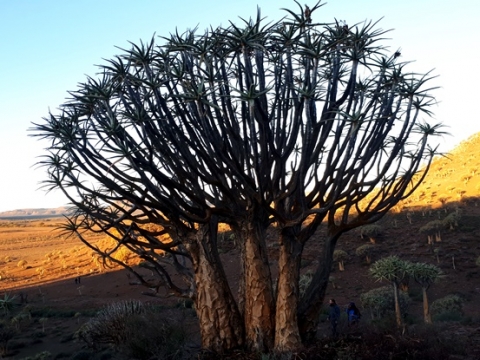 The scene of fairly similar-shaped, single-stemmed trees in the large Quiver Tree Forest loses its uniformity when occasionally livened up by a multi-stemmed one. Nature allows sameness of species, not monotony as in factory production.

Growing several stems in a clump is an exception proving some rule. Other rule deviations include: a trunk at an angle from unstable ground failing to sustain the gathering mass, maybe gradually after rain or a push from an unknown force; an asymmetrical crown lacking branches to one side; a particularly long or short stem topped by overly large or tiny crown.

In this case all the stems start their branching, their secondary, upper branching, at roughly the same height. Roughly similar thickness characterise these upper branches while length is determined by position to yield the smooth dome of stem-tip rosettes. Tertiary rebranching and more may occur yet higher up in random occurrences.

The branches of this tree all tend to curve up for sunlight, unlike many large quiver trees that bear their lowest branches horizontally, forming a full hemisphere of leaf rosettes. Being multi-stemmed may cause or increase this tendency.