Is the Quiver Tree Forest declining? 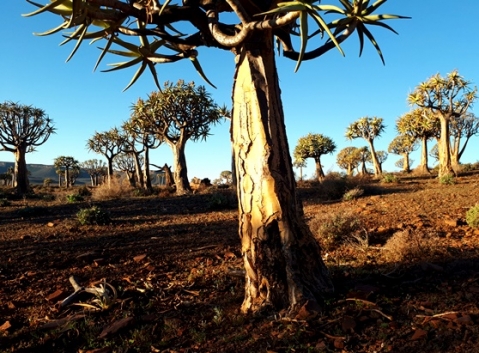 Parts of the Quiver Tree Forest consists of mature trees only. Other patches include saplings. Will new trees grow in this spot after these ones die? Are there enough young trees, given the eighty-year life expectancy of the average quiver tree to sustain the forest? What factors determine or favour the growth patterns here? What did the forest look like fifty and a hundred years ago?

Some of these questions can be answered by science or the local community, never all. Climate change is hotting up as a topic in many minds today, its full story unfolding gradually as some in the world watch with trepidation. What awaits humanity from this threat? Aloidendron dichotomum is already affected according to field surveys. A 36 percent decline in the species population is projected in one century that has already started.

Human impact on the environment and its preventable part are contested aspects of the debate raging sporadically but increasingly. Even if the ambient earth temperature isn't rising, the debate concerning it is certainly rising in participants, depth of argument and vehemence.

It’s not an easy issue. The average citizen can only judge the sense of it from confusing mixed messages in the media. Scientific results are complex, abstruse and to some inaccessible. They largely and increasingly converge on the positive answer that our actions do cause climate change and we can improve matters by improving our ways. Top leaders confuse matters by ignoring or denying the presented evidence. Public opinion is not nearly clear and conclusive, let alone unanimous.

Politicians have neither agreement nor widespread enthusiasm for the topic. Climate change holds risk for political careers, voter approval being as changeable as it is. Voting about facts one is incapable of verifying, is a silly activity at the best of times, but as the evidence mounts, impact of the issue may become decisive in future elections.

Humanity has never been at this point, never before been asked to babysit its planet. We’ve never fully recognised its crying, even if we could hear it. What do the climatic extremes of our time really mean? What views will responsible citizens adopt about promised inconveniences, carbon tax and whatever else may be in the offing?

Convincing many people of a new need is important if only a concerted, large scale effort can improve matters. Lifestyle sacrifices, changed consumer habits and even family planning are required. Empirical evidence rather than stronger arguments will more likely turn minds in the ranks of the unwilling. Can cyclone, ice and deluge make us put untried plans in place on a big scale? How much time do we have, or is it already too late? Isn’t the green cause a mere social pathology? Proof of the need is elusive or too complex for the ordinary citizen to be convinced yet. While we’re speculating, time may be running out or may have run out.

Whatever the answers, some small part of any conservation and turnaround endeavour has to be local, implemented right here among farms and veld as well as everywhere. Wide participation is crucial for a decent start. Fortunately one doesn’t need so much global knowledge to fix one's backyard. Controlling the grazing by livestock or game, preventing damage to desired plants, removal of undesired ones, dealing with plastic, littering and habitat destruction while planting trees are comparatively clear choices and easy to do. These things are good locally whatever the big truths about climate change turn out to be.

Air and water pollution, aligning mining and industrial practices call for more wide-ranging schemes. Decreases in rainfall patterns and many climatic phenomena are beyond human control in the eyes of many, most or all. Changing human behaviour on a large scale requires logic based on compelling evidence. And one man’s common sense is still the next man's alarmist rhetoric.

The belief issue here is secular, believers and unbelievers separated by what they observe, understand and become convinced of. The global race has started in places, is starting or about to start in others, although its direction, speed and marshalling are not at all clear.

Living with disruptive climate cycles, increasingly beyond human control or comfort is happening now. (Or not, according to the grandfather down the road who has seen it all and remembers a bigger storm from his youth.)

Even urban dwellers are nervously watching the weather these days, a farmers' pastime of old (Wikipedia; http://redlist.sanbi.org).