Home » PARKS AND GARDENS » Quiver Tree Forest » No pyramids
Back to Category Overview
Total images in all categories: 8,946
Total number of hits on all images: 3,963,535 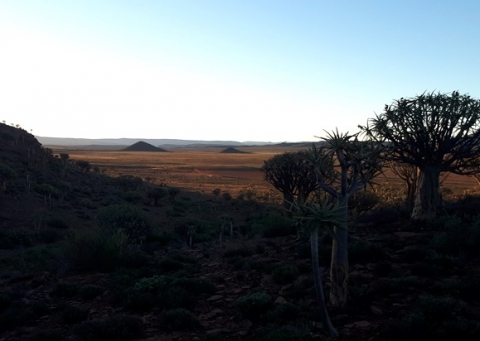 Aloidendron dichotomum, the quiver tree, may start off as an elongating, thin stem topped by one leaf rosette. Branching delayed for several years may initially be into two equal rosettes only, occurring at the top of the long, smooth stem. Continued further branching brings about the eventual hemisphere of leaf rosettes over the stout, erect bole. The result is a bit like a giant mushroom, up to 7 m tall, commonly 5 m.

And, no! There have never been pharaohs commissioning pyramids in these parts. Visible in the distance are natural, cone-shaped hills resembling pyramids. The earth itself and events in its atmosphere craft the topography, mostly slowly in human terms. An endless cycle of events ensures continuous becoming within the laws of physics or wondrous magic, depending on the state of mind of the observer considering it.

Geological metamorphosis of the land is a longer haul than the coming and going of a vegetation cover like the Quiver Tree Forest. What else has grown here before or will grow in times to come?

Is the forest on its way to those hills in the distance or has it covered them in the past? Pessimist or optimist considerations regarding a half full or half empty glass or hill? Is the forest size changing or static related to something in the soil?

People are part of nature, not overseeing it. Continual learning about the world is a success when resulting in a caring hand and considerate mind. Humans arrived late and are likely to depart early, not likely to ever know the full story of their world.

Some of the species seemingly under human control will see them go. Who knows, maybe the quiver tree is one of those.