Home » PARKS AND GARDENS » Quiver Tree Forest » Overcoming adversity
Back to Category Overview
Total images in all categories: 9,402
Total number of hits on all images: 4,225,765 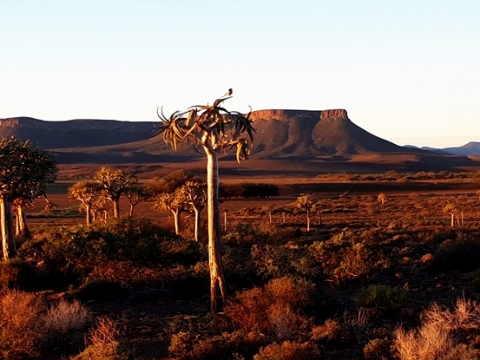 Plants are damaged by many causes, including climate and weather that bring drought, heat, wind, hail and flood. Each such disaster strikes in a range of typical locations, challenging the vegetation at its mercy in particular ways.

If climate change brings more extreme weather conditions, the damage caused will increase. The quiver tree is already experiencing proven decline in habitat associated with heat. People are becoming increasingly aware of climate change, hopefully responding in ways that will diminish such effects.

Animals and people do their thing with and to plants in a myriad of ways. Plants are food to much that lives on earth directly or indirectly. The lion is an indirect plant user by eating the eaters of grass and leaves. Insects live in and on plants in variable degrees of intimacy. Browsing and grazing animals maul and trample plants in addition to eating them. Elephants push trees over and uproot them, sometimes to reach roots or fruits, at other times because they can. The list goes on. People do all these things and more, as well as restricting animal movement by banning them from many places they used to visit and, of course, by killing them.

When the large mammals still roamed free, they migrated, following the food. This allowed depleted regions to recover for serving everyone in need again later. Migration routes have been blocked and terrain usurped by expanded people settlement. Animals are forced to behave differently, losing part of their nature. Human observers miss parts of the nature of nature.

The wild becomes the tame or the restricted to ensure human need and comfort. The bothersome insect, anything called vermin and much else is destroyed, sometimes out of habit that made sense in the past but no longer. The unnoticed leftovers of wildlife still surprise us, delight most of us. Children love the deliberately conserved species seen on occasional day visits to zoos and in their favourite books. Nature reserves and game parks are national treasures wherever they exist.

Nature has been and is being changed intentionally by goal-directed actions and also by unintended consequences. Some of those "accidents" are distressful to people when realising late or too late what went wrong.

Nature is always too complex for changing one variable and expecting that nothing else will change. The entry of human settlers to live in a previously pristine spot in the wild is not one variable but a family pack of them, instantly dominating an ecology.

Animal and plant species have been and are being lost at an increasing rate in our time. Population trend monitoring of species through Red List facilities is happening to counter this loss. It warns, selects targets for conservation activities and informs freely to gain support for concerted conservational efforts.

We sometimes know what the best action is, sometimes have to change plans when an unintended consequence is detected. We shall always have to learn as nature is not static. It heals and solves problems in its own way, while people carry on doing what they think is best. The dedicated students of nature don't always agree what to do because they may be watching different natural phenomena in a very complex whole, deciding upon different conservation strategies and outcomes.

Environmental Impact Assessment requirements have been introduced to prevent or at least reduce some mistakes prior to the authorisation of development projects in some countries, including South Africa.

A big proportion of insect species on earth, let alone their ecological niches and living habits, have not yet been scientifically studied, even named. Human impact may, however, already have affected or even obliterated some of them without people ever learning about their existence by the time they are gone.

Concern is growing about human impact on species diversity among mammals, birds and marine life. Plastic in the sea is now a major issue. Human awareness of marine life forms, their ecological systems and needs is on the rise, enhancing the realisation of accumulated pollution caused by people. Expectations are increasing that human practices and lifestyles will be amended faster in future as this lobby is strengthening. Whether these changes will be fast and big enough for most of the currently endangered species remains to be seen.

Opposing camps for commerce and greens are being broken down. Every business depends on nature for a sustainable future and every conservationist must eat. People can espouse both perspectives in balanced thinking when they are not too much in a hurry. Their actions can meet the requirements of seemingly opposing needs.

Societies and ecologies are complex systems that live as long as all their subsystems function. Objectives bloated into compulsions cause deafness to messages of the existence of forgotten needs expressed by society, unaligned to the project of the day. Monomania is the fanatical extreme of every good intention gone psychotic.

Pesticides and practices in agriculture, commerce and industry on a long list are coming under the spotlight for possible detrimental effects and discontinuation or replacement. People are willing and concerned but our comfort is still largely sacrosanct and money talks. The dialogue can and should be raised to more informed and objective levels; is improving in many places.

Natural vegetation recovery from every setback is continuous but so is further attacks on plant wellbeing in nature. Who wins each of these little or big races is of interest somewhere, but people are by nature in a hurry themselves. They mostly run their own races of existence rather than cheer for a Protea or Erica that makes it.

In an arid area like this landscape, strong-looking trees may be in a delicate situation without people noticing. The variables affecting the wellbeing of a plant are not directly obvious to the untrained eye until a decline in a population is measured.

Conservation includes stimulating knowledge areas and a growing cluster of sciences offering rewarding careers to people that have a wide range of talents, values, personalities and needs.