Home » PARKS AND GARDENS » Quiver Tree Forest » The same and different, life's creativity
Back to Category Overview
Total images in all categories: 8,946
Total number of hits on all images: 3,963,654

The same and different, life's creativity 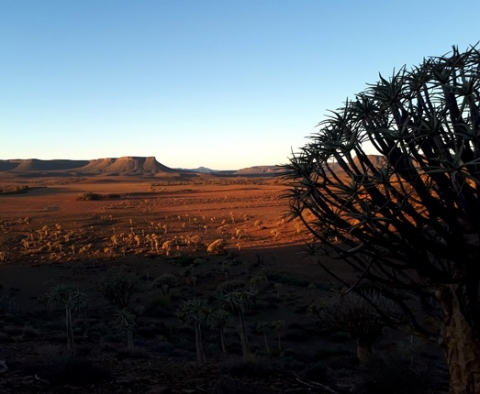 The long and the short and the tall are all present in this community of quiver trees, as in the song about people shapes. The normal intraspecies differences occur in plants grown from seed, as with animals and people, derived from their genetic endowments.

Individual differences give a species its range of characteristics that makes some more suited to challenges of living in a particular environment. This translates into flexibility for adaptation, a gradual process of changing a species in “the right direction” as the environment changes.

This happens because those better suited to prevailing conditions live longer, procreating more and their offspring more likely to have appropriate genetic makeup for successful continuation of the species. Individuals lacking the desirable or required characteristics in terms of conditions may be healthy but tend to die before they can procreate. Natural selection continues wherever species procreate.

Global warming may one day produce more half-cooked plants, insects and people; sometimes preferred over half-baked ones. (Check your partner for the effects of blanching.)

Homogeneous micro-conditions prevailing in isolated spots result in localised ecologies displaying unique characteristics. A natural quiver tree forest in Namaqualand may be regarded as such a niche ecology, the trees attuned to the specific environmental conditions. Factors contributing to such phenomena are many, including climate, the presence or absence of natural enemies or ecological partners that may include micro-organisms, soil chemistry, moisture and more.

The hand dealt to every living entity on earth is a unique gift (or sometimes curse in the case of humans, people being funny that way). The hand may be lavish or meagre, always randomly distributed, therefore fair in a way. If life manages to start, all the options of opportunity and hardship are still possible all the time; everything lives as best it can.

Equal opportunity and constitutional rights are non-existent. A single chance exists for a time to make a go of it against the odds of time, place and endowment. No complaints department, no litigation.

Producing offspring or not is the significant issue for every organism in nature. The individual life is what it is, its meaning or purpose in natural terms residing in its procreation. Babies, seeds, eggs, dividing cells and whatever other form all qualify, depending on whether the particular species replicates itself successfully.

Life itself exists and continues through every live thing that reproduces itself. Life is at any moment embodied by or equal to all the "itselfs" existing in that moment. In time, life changes in its chain of continual becoming via all its "itselfs" collectively reproducing themselves on earth (and wherever else, maybe). Life is thus the continual change of all organisms collectively in tune with their respective environments.

Through its normal succession of generations, every sexually reproduced species that combines characteristics of two parents gradually and continually becomes something else over time, courtesy of its particular chromosomes and genes. Thousands of years from now, should some of the "itselfs" still be at it, nature will still be nature, while every "itself" may be a "something else".

Small, step-wise shifts in the successive generations gradually bring about minutely different, new itselfs of umpteen kinds. They are thus fashioned by evolution that keeps pushing in the direction of all conducive environmental conditions via selective early deaths of the unfortunately endowed. Both transformation and diversification into multiple subspecies may ensue as consequences. Those that don't fit die, as they fail to breed their anyway out of favour kinds.

The appropriately endowed ones carry on via offspring, fiercely as species, serenely as individual itselfs. The individuals in the chain of generations fortunately lack the big picture and thereby the burden of such a mammoth task. Not having read Darwin, of course.

Each of the future "itselfs", with more or less resemblance to their twenty first century ancestry, will have moved on to live in accordance with the opportunities of times we can know nothing about and probably would not survive in.

Opportunities may favour the proliferation of more species when the good times roll, reducing their number in hard times like the days of global warming. This ebb and flow in the natural diversity of life forms is a key part of life's continual becoming.

In this way every individual life, down to the most ephemeral and insignificant, is a celebration of success, the collective achievements of all its ancestors to date. For all of us that reached the twenty first century there is a long story, mostly untold of how we got here.

Children or no children, all that lives and have ever lived feature in the unwritten annals of their species. These are chapters in the collective annals of life; one book! This is the reality of all life so far, a collectively entity and biggest event after Big Bang.

The future? Life as a whole is on a roll! Heat on earth or not. For individual species the future is less rosy, but their specific fortunes are widely divergent. The precise current evolutionary form of any species is mostly even less secure in the distance of tomorrows. Morphing or extinction are the main options, carrying on regardless a lesser one. The beasties of the future are a mystery. Salute them! Some may be your offspring.