Home » PARKS AND GARDENS » Quiver Tree Forest » The tree aloes
Back to Category Overview
Total images in all categories: 9,428
Total number of hits on all images: 4,236,296 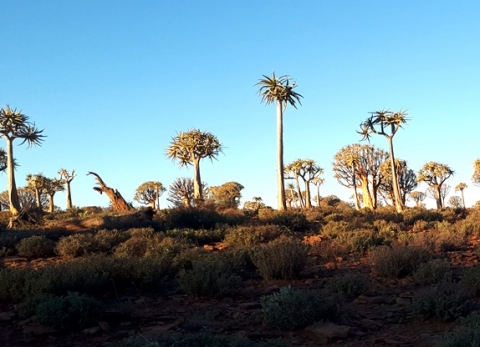 Height makes some Aloidendron dichotomum plants resemble A. pillansii. The distribution of the latter, endangered species does not, however, reach nearly as far south as the Quiver Tree Forest of Gannabos near Nieuwoudtville.

Three related tree aloe species of the Aloidendron genus occur in the dry northwest of the Northern Cape. A. pillansii is restricted to few sites in the Richtersveld, notably Cornells Kop and areas in southern Namibia. The plant’s future is probably already adversely affected by climate change.

Apart from the two species mentioned, there is also A. ramosissimum, a vulnerable species declining due to generally increased temperatures, trampling by livestock and overgrazing.

There are two more South African Aloidendron species, both considered of least concern in Redlist terms: A. barberae that grows in the high (summer) rainfall area among dense shrub and tree vegetation along the eastern parts of South Africa and A. tongaense in the far northeastern coastal flats of Maputaland in KwaZulu-Natal between Kosi Bay and Lake Sibaya. It is also found in southern Mozambique (http://redlist.sanbi.org).