Home » PARKS AND GARDENS » Quiver Tree Forest » What history lies here?
Back to Category Overview
Total images in all categories: 9,000
Total number of hits on all images: 3,994,654 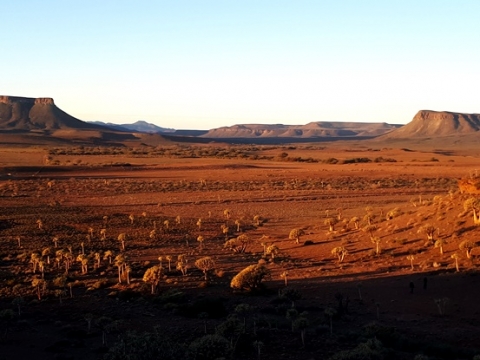 Long before cameras and cars, the silence that still reigns here was studied by San hunters for the presence of animals. Some would serve as food, others avoided for safety’s sake. A small leaf noticed on the ground might disclose the presence of an edible bulb to be dug out. A small hollow in the sand tells of a particular kind of animal that passed here, in which direction and how long ago. If you know your game.

Knowledge increases in our world, is also continually being lost from it. Some of it is retrievable by ever improving forensic technologies, other parts not at all. The little leaf spotted by a San gatherer may be one of many small and big vegetable items on her menu. These blessings from the veld are collected and consumed in daytime to ensure night-time rest on a full stomach. Some of those plants may today be eaten by nobody because the knowledge has been lost.

Other items in the vegetation would serve to poison arrow tips for the hunt. Human tribes, like other life forms come and go, succeeding each other along with the changes in conditions that shape the fortunes of all species.

Did an old wrinkled Nama once sit here, telling a much-repeated family yarn to a son? Some of those departed leave traces permitting reconstruction of a history, the story of some yesterday. Most dead animals and people, as well as much else of the past disappear without trace. We retain curiosity for past and future, musing in the present. Our knowledge of the past increases continually, its incompleteness eternal, its sense the ephemeral truth of our time.

Reconstructive technologies for creating an agreeable past improve faster in advanced societies. They build confidence that the “essence”, representative descriptions of what was before, can be and have been duly captured. In the absence of complete proof, it becomes a game of connecting elements of evidence in logic or fantasy, often bits of both.

Humanity can't be comforted by the world itself, only by the up-to-date version of context spun continually from selected parts of it. That's the highest function of the mind, garnishing reality.

The search for our context referred to as history creates the need for theory and its testing, but also for fact-free free-wheeling and make-believe. Both these kinds of human activity generate stories albeit of different fabric, sometimes hard to separate. Our findings resemble us as well as the subjecs of our investigations.

Free reign story-telling is (mostly) permitted in the free speech loving society of today, although people use power in many ways. Notes grabbed from thin air or its electronic version, the Internet, may be both interesting or illegally accessed, so beware!

Domination by the powerful or the law does not, however, prevent stories from proliferating. It merely extrudes the suppressed stories in blown up versions into the open air for all to consume like certain commercial snacks. Humanity loves its stories so much that they will flow as long as there's a voice near a willing ear. And story is so close to "Hi Story!"

History is a name for scientifically sanitised components of stories about the past. They reflect facts, putative facts and perspectives selected for informing and enabling the society of an era or parts of it to appreciate the world of their time and thereby themselves. The craze is now, however, another word for it: narrative, suggesting a funkier form for better story spice, satisfying broader tastes than those of the fact fiends.

Livening up the past says: "All stories go!" But check the law, the lock on the door and the device security if you tell them.

People tell stories to pass the time, give enjoyment, build solidarity and create meaning for lives and endeavours. Story meanings, explicit or unnoticed, serve in the short term to build egos and the psyche of groups, nations and humanity itself. We are better in our own eyes through our stories, so we polish them, although some polishing happens secretly.

Story parts are rearranged like Lego Blocks to suit the latest past, something like hairstyles change from looking in the mirror. The never-ending quest to look inside ourselves and to look better to ourselves and others means we can't leave our stories alone. Our inner workings tease at the perimeter of consciousness. And, heaven forbid, it’s all the truth and nothing but, all the time!

The goal is elusive. The perfect story is never told as life is about polishing, changing details in every rerun. The thought stream flows like a river, banking on gravity but never reaching the sea before life ends. Understanding, also the deeper forms of it, advances patchily in individual heads and from the stories shared with others. Life in the mind and of the mind is enhanced by communion of minds.

This is how the mind feeds on stories. We psych ourselves up from stories for the challenges of our quests, careers, spiritual life, sporting achievements, personal relationships and our many wars in all their forms, even the inner ones. Where there are people, there is language for embodying thought into explicit meaning. And always a new story ready to blow in the wind around people conferring; ubiquitous strands of mind-shaping, enabling and alarming narrative.

Like the old Nama we tell stories to our children for preparing them, turning them into ourselves, partly at least, so they can be safe as we sometimes feel. Then we take fright from our value prompts, stating solemnly that we only prepare them for living their own unique lives freely. This is when we realise how limited our rights in that department really are. Our insights are seldom new, occasionally factual, usually reassuring, for memory banks are littered with links to comfort zones. What served once in a particular context might come in handy again.

Talking to the children is part of their socialisation, sharing what we know and think we know. Much like the days when people stared into fires at night, not at television or other digital screens.

Digression from every children's story becomes more than possible, desirable or the norm, once the very young stop insisting on repetition of the classic or “proper” version of a favourite story as it was heard the first time. Always or sometimes remembering that information sources should not waste hurried humanity's time with ambushes of topic excursions.

Still, some walk or drive through any forest, even this one, thinking of romanticised old days when highwaymen would interfere, adding excitement to journeys. Fact and figment serve by way of random interjection, tangential and unconnected, stirring story pots for unforeseeable endings. Good stories metamorphose to taste and choice. The best have endings that people make happen.

There is, of course, the little matter or big requirement for certain stories to adhere to the truth. The now-truth, the near truth, the convenient truth or the available truth at hand; every truth being contextual, manmade. The appropriate context or its brother will present itself to the mind. And the mind, not always willing or working, may do the rest for a bad ending to a story that started so well!

There are also signals to indicate when a good story need not to be marred by fact.

As one stares into this wide expanse from the shade of a quiver tree with binoculars and camera around your neck, or the thong of the arrow quiver over a naked shoulder, the next story may germinate. Wait for Everyman’s Muse to slip in. She arrives unnoticed but for her gift, the exciting notion, the germ. Imagination and sticking to the thought line do the rest.

When rising to return, a new story is added to the memory stock, already half ready for telling at the fireside tonight. And more times at other firesides later, depending on how well the embellishments that come to mind serve as relish. Funny how the mind can convince itself that it shares something soul deep with a Bushman hunter of a thousand years ago from just gazing at a picture or a fire.

Connectivity grows in the unwritten encyclopaedia of the all-inclusive human narrative to which we all contribute our stories and from which source we are all continually replenished. New story strands imagined, hatched, born, conjured, brewed or made up with intent pure or otherwise in everybody at all levels below and in full consciousness, they all enrich us. Ephemeral and durable components of stories appear and reappear before mind’s eyes everywhere, wherever somebody is looking, thinking or dreaming.

Each story takes a life of its own in any mind or many minds. It meanders across cultures and contents, sinking and rising in the waves of the seas of living. This is the way to be human, good for the solitary soul and for all souls in solidarity. To be as we should be, a story-smitten species. The adventure of the mind is king.