Home » PARKS AND GARDENS » Fernkloof Nature Reserve » Penaea cneorum
Back to Category Overview
Total images in all categories: 12,061
Total number of hits on all images: 7,359,566 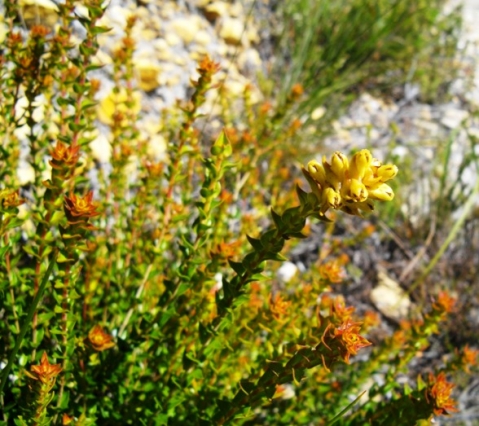 Penaea cneorum is a variable shrub, occasionally a small tree of 4 m that resprouts after fire. It has hairless upper branches that are sometimes reddish and densely covered in small, sessile leaves arranged in four ranks.

The compact spikes of small yellow flowers rest upon distinctive broad yellow, orange or pink bracts that grow at the tips of the branchlets.

The plant is found in the Western and Eastern Cape among fynbos scrub along stream banks and in damp areas of the coastal sandstone slopes from the Kogelberg to Port Elizabeth. Five subspecies of P. cneorum are recognised, none of them threatened in habitat early in the twenty first century (Vlok and Schutte-Vlok, 2010; Manning, 2007; http://redlist.sanbi.org).