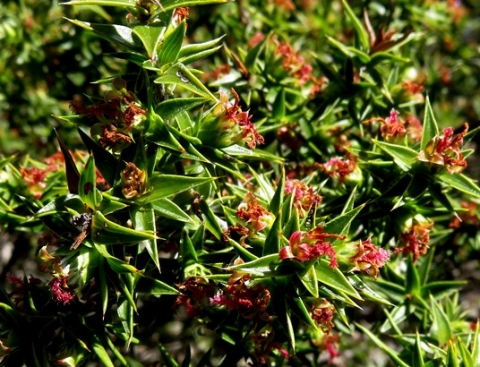 Cliffortia ruscifolia var. ruscifolia is one of the best known cliffortias, a spiny plant often appearing on disturbed land. Likely to be seen (or felt) next to mountain footpaths, the spiny leaves announce their presence the moment vigilance is low. Young growth is particularly hairy.

Male flowers in this species are rare. Female ones have solved this problem via a phenomenon called apomixis. This natural process in some plants produces an embryo without the occurrence of normal fertilization, triggered by the unavailability of a male counterpart.

This happens more in particular geographic regions. Other Cliffortia species may display the tendency as well, as apomixis is apparently common in the broader Rosaceae family, e.g. among blackberries.