Home » PARKS AND GARDENS » Fernkloof Nature Reserve » Bobartia indica
Back to Category Overview
Total images in all categories: 12,061
Total number of hits on all images: 7,359,620 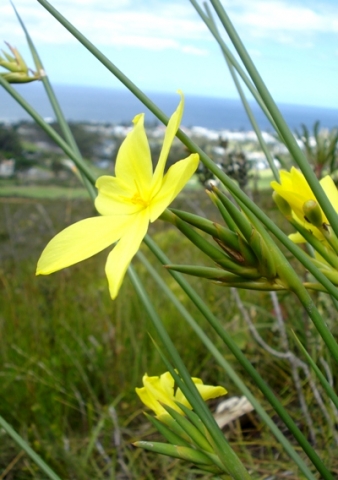 Previous
Image 3 of 22
Next

One may enjoy the view of Hermanus from a path of the Fernkloof Nature Reserve while passing much that will be in bloom, whatever the season. This Bobartia indica plant presented its charms early in November.

Its leaves are terete, i.e. cylindrical and longer than the flower stems. The tufted leaves, growing to 1 m in length, tend to become top-heavy and trail somewhat. The star-shaped flowers grow in heads of six to forty, subtended by long, green, needle-like spathes. Flowering happens from late winter to mid-autumn, usually after fire.

The plants are found on sandy flats and slopes from the Cape Peninsula to Caledon and Worcester (Manning, 2007; Bond and Goldblatt, 1984; Bean and Johns, 2005).