Home » PARKS AND GARDENS » Fernkloof Nature Reserve » Edmondia sesamoides
Back to Category Overview
Total images in all categories: 12,061
Total number of hits on all images: 7,359,566 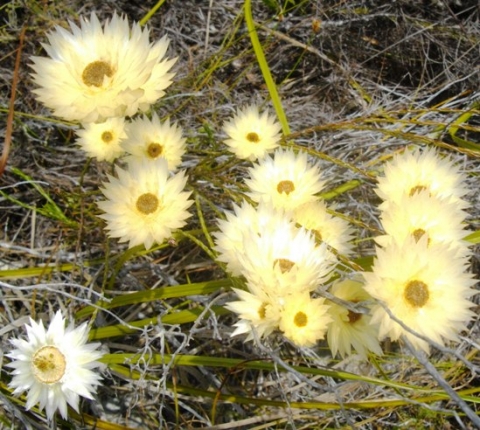 These flowerheads of Edmondia sesamoides were seen in Fernkloof in December. The yellow centres are not quite what they used to be when the disc florets were fresh. Each flowerhead measures close to 30 cm across. The fruits that follow are elliptic. The plant grows on rocky slopes and flats.

The needle-like leaves belonging with the flowers are tiny, adpressed to the upper parts of the grey stems. Lower leaves of E. sesamoides are spreading with their margins rolled up. The green strap-leaves in the photo belong to another plant. Personal space isn’t respected by fynbos plants!

Lower growing plants are gradually swamped in the fynbos by taller shrubs. This lasts until a veld fire restores a different balance, characteristic of an earlier phase in the growth cycle, allowing the short species to dominate again for a while (Manning, 2007; Bean and Johns, 2005).