Home » PARKS AND GARDENS » Fernkloof Nature Reserve » Elegia spathacea
Back to Category Overview
Total images in all categories: 12,061
Total number of hits on all images: 7,359,650 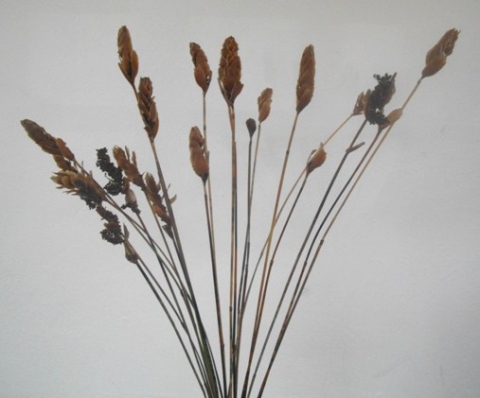 Elegia spathacea, commonly the pagoda goldreed, is an erect, tussock-forming perennial, a restio growing unbranched or simple culms to heights from 30 cm to 60 cm.

The flowerhead is square and tower-like, the spathes usually paler brown than the spikelets. The flowers of the sexes are similar, although the female flowers are obscured by their spathes.

The species is endemic to a small part of the Western Cape, from Paarl to Worcester and Kleinmond to Hermanus. Large stands occur in the Slanghoek Mountains and the plants grow on slopes in Fernkloof.

The habitat is sandy flats among mountains and on sandstone slopes in fynbos. The species is not considered to be threatened in its habitat early in the twenty first century (Bond and Goldblatt, 1984; Dorrat-Haaksma and Linder, 2012; iNaturalist; http://redlist.sanbi.org).