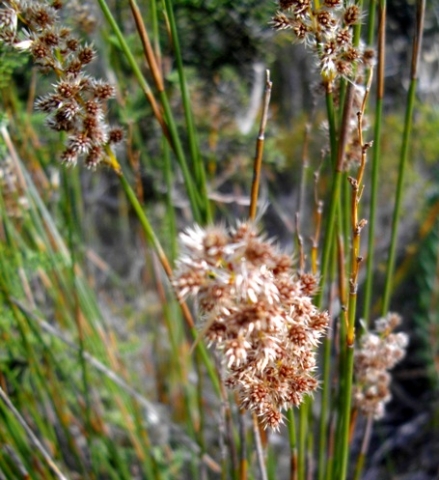 Previous
Image 5 of 22
Next

These male flowers of Ceratocaryum argenteum, sometimes called elephant quills, were seen in Fernkloof in July. Ceratocaryum is a genus of eight species in the Restionaceae family, all endemic to the Western Cape.

C. argenteum grows a spreading underground rhizome and a large tussock of unbranched, stout culms that may be slightly hollow. The male and female plants grow to similar size, about 2,5 m tall, their culms about 6 mm thick.

The male inflorescence is big, bushy and papery, its colour white or silvery and brown. Individual spikelets are indistinct, grouped in a multitude of small panicles at upper culm nodes. The bracts and tepals of the tiny florets are linear, equal in size. The large spathes below the flowers drop off early.

The species distribution is mainly on the coastal plains around Bredasdorp to Riversdale, extending somewhat into the Kleinrivier Mountains near Hermanus and Stanford.

The habitat is moist fynbos and scrub in sandy soils at altitudes below 400 m. The species is not considered to be threatened in its habitat early in the twenty first century.