Home » PARKS AND GARDENS » Fernkloof Nature Reserve » Malachite sunbird on Protea repens
Back to Category Overview
Total images in all categories: 12,061
Total number of hits on all images: 7,359,575 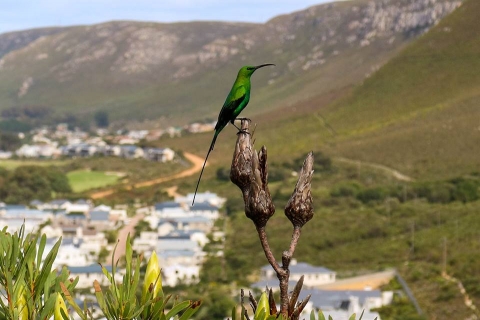 To dart about in fynbos safely and productively finding food requires alertness, keeping one’s wits about one. This malachite sunbird is inspecting visitor cameras, hats and water bottles from a comfortable distance, while quite aware that the Protea repens flowerheads below are either old and dry, good for a perch, or still young and closed.

A committed nectar consumer, who knows whether the long, sharp beak might suddenly enter the white cone of a flowerhead bud from the side for sourcing some juice? The species is not scientifically known as Nectarinia famosa for nothing.

The bright, metallic green feathers acquired by the male during the breeding season suggest that there may be a female in the vicinity. Ostentation and matrimonial bliss are relinquished for a quieter lifestyle once a desired heart has been conquered and family duties are done until next year. These large sunbirds often live solitary when not breeding, an arrangement not favoured among all species.

The malachite sunbird is very much at home here in Fernkloof as he is throughout much of South Africa, barring the east coast and the far north of the country. In Africa malachite sunbirds are present as far as Ethiopia.

Thriving in habitats as diverse as Cape fynbos, scrubby hillsides in Namaqualand and alpine grassland of the Drakensberg, the birds will also frequent alien plantations of Eucalyptus when those trees are in bloom (Maclean 1993; Wikipedia).